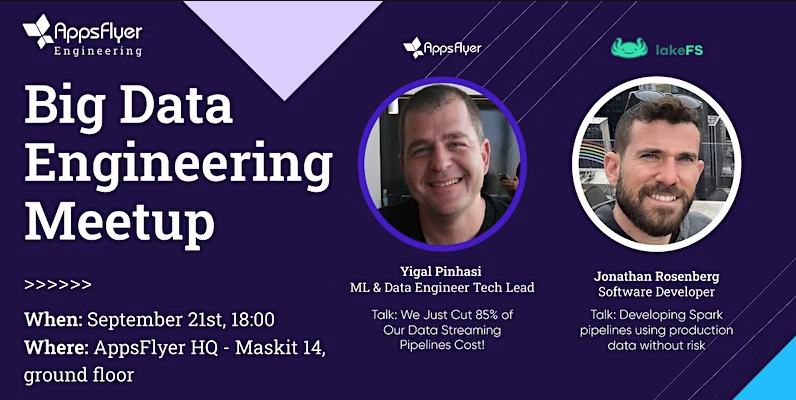 *The Meetup will be held in person and in Hebrew*

**Food and beer will be served

Moving from 30 to 150 Billion daily events can be regraded as a huge success, but at some point you come to the conclusion that the streaming model that served you up until now is creating too many pains, and is no longer suitable!

Join Yigal on his streaming journey that began with some difficult takeaways from AppsFlyer’s previous streaming model, and ended with rebuilding a new streaming model on production that now solves most of our issues, while cutting 85% of our streaming costs along the way.

In order to deliver high-quality data products, pipelines must be rigorously tested before they are deployed into production. Today, testing on production data requires either using a subset of the data or creating multiple copies of the data. The use of sample data is not sufficient for testing. It is essential to have a testing environment where you can test your end-to-end data pipeline against production data. Using lakeFS, you can test the pipeline on the entire production data set with zero copying, and without risk.

Yigal has been working at AppsFlyer as a Data Engineer for the past three years designing and building data pipelines, creating new streaming models, and pretty much eating, drinking, and breathing data.

Prior to joining AppsFlyer, for the past nearly twenty years, Yigal has worked in various domains and on various products such as: automatic warehouse, cellular gateways, cable modem VoIP, IT monitoring platforms, payment pPlatforms, Ad viewability and last but not least – mobile attribution. He shifted from RealTime embedded & telecom systems, to web microservices architecture and furthermore, to the Big Data and ML models.

Jonathan is a Software Developer at Treeverse (creators of lakeFS), and is very passionate about data. He has vast experience in building large-scale cloud-based distributed systems, and is an advocate for generalism, minimalism, and having-funalism.